San Francisco, 1944.  Oliver Wright, a homicide detective on medical leave from the Marines, is investigating an attempted murder at the Presidio when the Army asks him to guard Sophia Nirenska, a Polish resistance fighter who survived the Warsaw ghetto uprising in Poland and is touring America to raise money for children hidden from the Nazis in Europe. 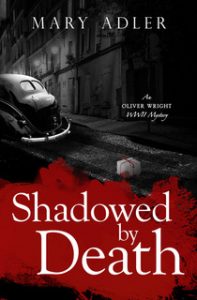 Neither is happy with the assignment, but after a car deliberately hits Sophia, they reluctantly agree that he should travel with her to Petaluma where she hopes to get the help of Jewish chicken farmers. She insists political enemies want to silence her, but Oliver believes the motive is more personal and connected to the woman found in the Presidio. He and his German shepherd, Harley, try to protect Sophia, but she insists on doing things her own way—a dangerous decision that puts them both in mortal danger.

When Oliver rescues a girl and her dog who are running for their lives, he finds the key to the dark secret at the heart of the threat to Sophia, a secret with its roots in Poland. When he does, he is forced to choose between enforcing the law as he knows it—and jeopardizing Sophia—or accepting a rougher kind of justice.

While this fast-paced mystery illuminates the fears and troubles World War II inflicts on many groups of people, it is also a story full of love, kindness, and a celebration of the gift of finding family among strangers.

Shadowed by Death will appeal to readers interested in northern

California, World War II, the destructiveness of totalitarianism, the bond between people and dogs, and communities that celebrate food and friendship.
It has received a starred review in Publishers Weekly and was a finalist for the Daphne du Maurier Excellence in Suspense and Mystery Award.

Starred Review. Set in 1944 San Francisco, Adler’s superior second whodunit featuring homicide detective Oliver Wright (after 2014’s In the Shadow of Lies) finds Wright, who has returned to the U.S. from combat in the Pacific with only one good leg, serving as a JAG lieutenant. He has mixed feelings about his first homicide case: “regret for the victim and her family, and an unseemly exhilaration at being able to do the job I loved—a job that required someone to die violently, unwillingly.”  … Fans of Sheldon Russell’s Hook Runyon series will find this a more than acceptable substitute. (BookLife) Publishers Weekly 07/13/2018.

Readers’ Favorite This is the second installment in this series and, after devouring this one in a single setting, I am frantically digging for the first. Set in the San Francisco Bay area i 1944, Shadowed by Death paints a wonderful noir-ish picture of a city at war. Ms. Adler also delves into the utter despair of those trapped in the Warsaw ghetto; one of the more horrendous atrocities ever committed upon a people. And of a time when keeping track of allies and enemies over an ever-shifting landscape was not always a given. Mary Adler does a masterful job in exploring the murky waters, hidden complexities and shifting allegiances of nationalistic and political loyalties during WWII. The author gives us a well-drawn hero in Oliver Wright to cheer for, though he’s often upstaged by the heroics of his sidekick, Harly — his ever-faithful German Shepherd who saved his life in Guam. I highly recommend Shadowed by Death; a definite must-read. Neil A. White.